The visit was an opportunity for NCGA to thank the President for following through on the commitment to allow for year-round sales of E15, a priority for corn farmers. On May 31, the Environmental Protection Agency (EPA) issued a final rule for E15. In addition to increasing demand for farmers, higher blends of renewable fuels such as E15 reduce fuel prices for drivers by three to ten cents per gallon and result in lower emissions, improving air quality and providing greater greenhouse gas reductions.

Ross also urged President Trump to address EPA’s waivers to large refiners that are undermining the Renewable Fuel Standard (RFS) and work with members of Congress to pass an infrastructure bill.

Members of NCGA’s board of directors, in nearby Omaha for a board meeting, also attended the event. 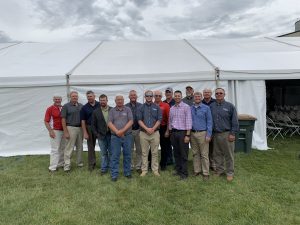