This morning, the White House released its intention to uphold the integrity of the Renewable Fuel Standard (RFS) by reallocating waived gallons of ethanol. The Nebraska Corn Board and the Nebraska Corn Growers Association thank President Trump and his administration for following through in their commitment to our nation’s corn farmers and our ethanol industry. Nebraska Corn also thanks the USDA, our state’s congressional delegation, Gov. Pete Ricketts and Nebraska’s corn farmers who took a unified stand in demanding the law is upheld and the goals of the RFS are reached.

“We’ve been waiting for a reallocation of waived gallons for a long time,” said Dan Nerud, president of the Nebraska Corn Growers Association and farmer from Dorchester. “To say we were upset with the refinery waivers is an understatement, so today’s announcement is welcome news. We’re very happy with today’s announcement.”

“I’m extremely excited with today’s announcement,” said David Bruntz, chairman of the Nebraska Corn Board and farmer from Friend. “Today’s news just goes to show what our growers can achieve when our voices are unified. Thanks to all of Nebraska and our nation’s corn farmers who rallied together to ensure we have vibrant corn and ethanol industries for years to come.”

Nebraska Corn looks forward to working with the administration to ensure the RFS is fully realized and the clean-burning, renewable ethanol industry continues to thrive. 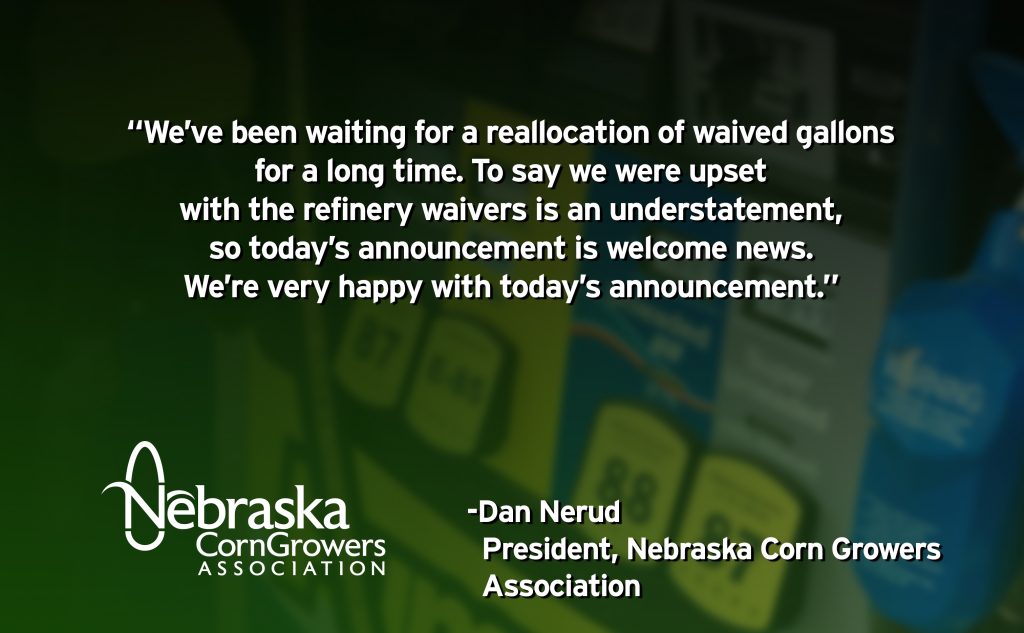